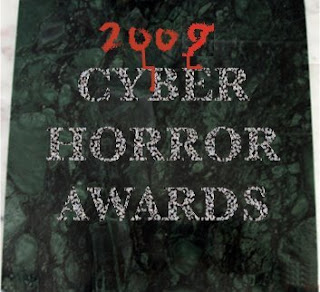 Just checking in to make sure y'all haven't forgot about the Cyber Horror Awards--the one and only horror film awards voted on exclusively by the online horror blogging/writing community. Last year's awards were a tremendous success, drawing praise from the likes of REPO production designer (and Saw V director) David Hackl, and Let the Right One In composer Johan Soderqvist. Next year's awards will be even bigger.

One of the criticisms of last year's CHAs was the fact that there was no formal nominating process. I'm pleased to announce that that will be changing this time around. I've set in motion the creation of an official nominating committee, which so far includes Fangoria.com editor James Zahn, LoTT-D founder John Cozzoli and noted horror critic John Kenneth Muir as a start. Expect more to come soon.

Plus, the roster of fine bloggers and writers who will be included in this year's voting process has been vastly expanded from last year's. And last year's included the likes of Cinematical's Scott Weinburg, Horror's Not Dead's Peter Hall, Kindertrauma, Horror-Movie-a-Day's Brian Collins, Fangoria.com's Brian Matus, and the Stoker-winning Vince Liaguno of Slasher Speak. Not prepared to divulge who I'm adding this time around, but let's just say that many of you reading this may be in for a pleasant surprise in the months to come!

Balloting will begin at the end of the year, and by the looks of things, it should be quite an interesting field. The first half of the year may have been a bit slow, but when all is said and done, 2009 is a year that will have brought us films like Drag Me to Hell, Orphan, Moon, Grace, Antichrist, District 9, Jennifer's Body and Zombieland, to name a few.

So keep an eye out for more announcements to come regarding the 2009 Cyber Horror Awards!
Posted by B-Sol at 11:51 PM 3 comments: